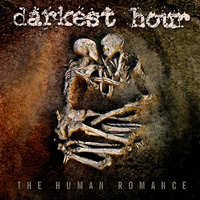 Stolen Swedish riffs be damned, Darkest Hour are still around, remarkably, and back with an album in the form of The Human Romance that may (or may not) be their most effective in years. Their weak spots are as obvious as ever (read: singer John Henry), but their strengths (melody, hooks) are in full swing over the course of this 12-song platter that leaves little to the imagination, yet is alarmingly memorable at the same time. Blast you, Sweden!

With an ace production job courtesy of Soilwork mastermind Peter Wichers (go figure) holding things down, DH allows themselves to settle into the niche between full-throttle quasi-Swedish thrash and contemporary modern metal. Henry keeps the band out of both territories, and while his growth is subtle (the dude sounded like he was simply slobbering over the band’s early albums), he fails to produce any real “ah-ha!” moments, save for the semi-clean singing on “Savor the Kill.”

Forever at the root of the band’s sound, the proliferation of Gothenburg-ready riffs are ultimately what keeps The Human Romance chugging along. Just reference the speedy “Man and Swine,” as well as the toss-back to 2002 “Your Everyday Disaster.” Perhaps the real standout here is the lengthy instrumental “Terra Solaris,” a jam that recalls the melodies, labyrinthine constructs In Flames (i.e. “Wayfarer”) and Soilwork (“Enter the Angel Diabolique”) used to churn out at the drop of the hat in the ’90s.

Darkest Hour have always gotten a free pass when it comes to their reckless mining of the Gothenburg sound. Not sure why, probably because their songs manage to stick, plus they do little to disguise what they’re doing…it’s no secret who is responsible for the band’s sonic template. For The Human Romance, execution is principal, for it’s a foregone conclusion that Darkest Hour are done trying to come up with anything new. Nevertheless, trying to get rid of this album from your psyche is next to impossible…