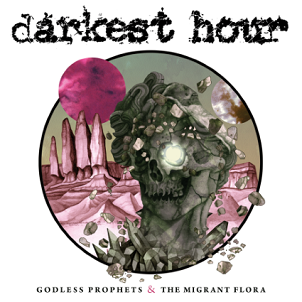 Somewhat of the unsung band from the New Wave of American Metal movement (whatever happened to that term?), Darkest Hour have notched their ninth album with Godless Prophets & The Migrant Flora. Their fourth album in as many labels, Darkest Hour turned to crowd-funding, resulting in over $70,000 worth of donations. Their partnership with Southern Lord is not a likely pairing, but given DH’s track record and (clearly) devoted fanbase, releasing Godless Prophets is a prudent decision.

Still hovering in the in-and-out zone of melodic death metal and hardcore, Darkest Hour live and die with the constant growls and howls of John Henry. Henry has gradually refined his bark as the years have progressed, a change from his early days of singing with a mouth full of old razorblades (or so it seemed). As per the band’s habit, a good portion of these cuts are frantic, like “Knife in the Safe Room,” and in particular “None of this is the Truth,” which hauls in some choice melodies. Outside of the short instrumental “Widowed,” Godless Prophets is quite unrelenting, although the variance displayed on “The Last of the Monuments” and “Beneath it Sleeps” still provide the ample funnel to the band’s Victory Records days.

While it’s odd to think of a band like Darkest Hour as a veteran act, it’s the truth. Technically, they’ve been around since 1995, so for them to produce an album as agro and fuming as Godless Prophets & The Migrant Flora means there’s ample reason to believe they’ll be soldiering on for an extended period of time.