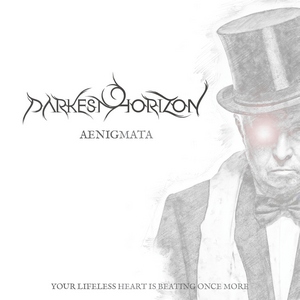 German symphonic death metal act Darkest Horizon has been slowly building up their repertoire over the last decade, accumulating two EPs and a previous full-length (2014’s The Grand Continuum) in the process. Aenigmata is their latest release, and while it does tend to stick towards a predictable route one can’t fault the execution it commands.

While melodic death might be a suitable tag for the band as well, there’s no doubt that much of the melody in Darkest Horizon’s sound is coming from the synths that back everything up. The way that Darkest Horizon implements the keyboards into their overall approach is a solid one. They have plenty of breathing room, and only on a few occasions does the instrument become the driving force (“The Spectral Hours” for instance). Instead there is a balance of power that the usually thundering riffs share with the keys, allowing for some nice tradeoffs. The band accelerates into tasteful blastbeat-riddled territory on occasion, and it’s usually at these quicker tempos that give the most charge for the listener. “Enigmachina” and “Catharsis for a Heartbeat” are two examples of how the band can take galloping tempos and catchy melodies and let the backing keys boost them up to the next level. The sometimes grandiose melodies provide some standout, raise-the-fist type of moments (“Tempus Inversus”) but with a longer, near 50-minute runtime, some of the components become a tad familiar by the time you start to reach the end, which is really the only fault to be found on the album.

Anyone who tends to enjoy a symphonized version of death metal (or melodic death metal for that matter) should enjoy what Darkest Horizon is all about. It’s catchy, epic, and keeps the heaviness intact – something that makes Aenigmata worth checking out.