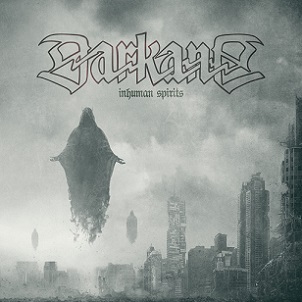 Sweden’s Darkane has always been caught in the margins: Not melodic enough for the In Flames and Dark Tranquillity crowd and not breaching the technical walls to run with Meshuggah’s forever swelling following. While this has done them zero favors commercially, it has propelled the Swedes to cult favorite status, especially Rusted Angel is tossed into the discussion. Their last studio album, The Sinister Supremacy, hit in 2013, giving the metal population ample time to appreciate what Darkane has to offer, which, if judging their new Inhuman Spirits full-length, is quite plenty.

There isn’t much that separates Inhuman Spirits from 2005’s Layers of Lies or 2008’s Demonic Art — both were tech-thrash toss-ups with mild melodic engagement. Per the usual, Darkane is driven by the ultra-excellent drumming of Peter Wildoer, who remains one of metal’s finest skin-bashers. Wildoer’s fluent, pepper-y style is always like that extra bit of icing/frosting that is just enough. Just the manner in which Wildoer handles down-beat, thrash drumming on “Embrace the Flames” is indicative of how much he holds Darkane together. He’s one of the few drummers worth singling out these days.

Of course, the rest of Darkane are no slouches. The Klas Ideberg and Christofer Malmström continue to dazzle through dashing triplets or solo trade-offs. Vocalist Lawrence Mackrory (making his second consecutive Darkane album after popping up on Rusted Angel, then bowing out) is animated as ever, proving himself less of a death metal barker and more of an extreme metal chameleon. All parts (and things) considered, Inhuman Spirits is a welcome return from Darkane. Their discography is near without flaw. Consider Inhuman Spirits another notch in Darkane’s belt.