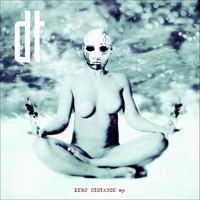 Zero Distance is a stopgap for the Swedes, as they close out the touring for 2010’s We Are the Void and prep for a fresh studio platter, due sometime in the middle of next year. It’s the first EP of its kind for Dark Tranquillity, for they’ve typically gone the single route for their extended plays (see: Enter Suicidal Angels, Lost to Apathy), yet the songs

on Zero Distance were initially tacked on to the extended version of We Are the Void, extracted for this particular release.

Because the songs are leftovers, there’s an overriding flatness to this release, with DT showing some signs of creative wear-and-tear. It’s natural, only because they’re one of the few Gothenburg bands

that never deviated from the course. Such a hardline stance certainly appeases The Gallery and The Mind’s I crowd, but Blistering isn’t so sure it serves them well in 2012. The title track hits the skids with a familiar, bland melody lifted from Character, while “Star of Nothingness” is the only song

out of the five with any sort of gravitas; buoyed by some churning melodies and Mikael Stanne’s standard-issue rasp action.

The usual assortment of electronics, Swedish thrash, and steadfast melodic death metal are in fully play here, with DT doing virtually the same thing they’ve been doing since they righted the ship on 2002’s Damage Done. Readers of this ‘zine should be well aware that we’ve been fervent backers of Dark Tranquillity, so this is a case of minor disappointment over one-sided bashing. Worrisome is that Zero Distance could be more about a band whose creative reservoir might finally be drying up than anything. Good thing this is just an EP…a full-length of this type of material would result in the first real dud in the Dark Tranquillity catalog.