Dark Tranquillity – Where Death Is Most Alive (Century Media Records) 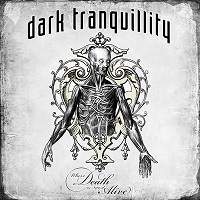 [7.5/10] Now the lone, sole flag-bearer of the Gothenburg melodic death metal sound, Dark Tranquillity gets reflective and retrospective on Where Death Is Most Alive. Comprised of a 2-CD live show and 2-DVD live show/career documentary

and promo videos, Where Death Is Most Alive is a fitting, albeit somewhat incomplete snapshot of the band’s 20+ years of existence.

The live portion (both on CD and DVD

) was captured in front of a rapturous audience in Milan, Italy. The crowd’s buoyant participant aids the band during stellar numbers such as “The Treason Wall,” “Lost To Apathy,” and “ThereIn,” the latter of which is buried on the generally disregarded Projector album. Sound-wise and visually, things are crystalline and the band spares noexpense

on setlist choices, rolling out rare numbers like “Lethe,” “Dreamlore Degenerate” and “The Mundane and the Magic.”

Hats off to the band for including various live footage over the years, some of which includes current In Flames/former DT frontman Anders Friden during the band’s Septic Broiler days. However, the “Out of Nothing” documentary is lacking, leaving a lot of holes in the band’s history. Absent are interviews with the aforementioned Friden or details of DT’s short-lived stint on Osmose Records. In fact, the documentary skips past the late-90’s era of the band (where Projector nearly derailed DT’s career) and focuses more on the Damage Done album from 2002. This paints a rather incomplete picture of what is detailed and fascinating history.

Outside of the squabbles with the documentary, Where Death Is Most Alive is well-done across the board, which is no surprise given Dark Tranquillity’s near flawless track record. With a back catalog that is deeper than most think (especially the back-to-back awesomeness of The Gallery and The Mind’s I), there’s a lot to celebrate. A good starting point for the uninitiated, a mild disappointment for devout followers of the last “true” Gothenburg band standing.