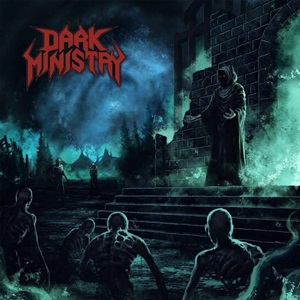 This five-piece heavy metal act Dark Ministry hail from Ottawa, Canada – containing long-time ex-Exciter drummer Rik Charron who spent 19 years with the group from 1996-2014. Establishing a new band in the current marketplace always can be a challenge, given the tens of thousands of groups hitting the scene hard and vying for limited attention. So it’s always wise to start off in a sense through a small sample of what you can do and build an appropriate buzz accordingly – thus a debut EP for The Sermon Begins adequately illustrates the band’s in your face style for a quick three song outing.

The quintet traverse around a number of sub-genres, keeping things solid in a traditional heavy metal format while occasionally veering into the speed/thrash or groove metal platforms depending on the needs of a particular arrangement. The exotic twin guitar lines make “Blood Driven” an easy highlight, the rhythm section work in line with straightforward Judas Priest power while the lead break has a lot of crazy bends and squeals to heighten the energy factor. Rik flexes more of his double bass proficiency and old Exciter speed on the follow up “Voodoo Sacrifice”, the main riff and changes in line with Metallica meets Pantera. The closing “Killing Machine” has a vicious, venomous attack, a charging guitar line with the vocals snarling against the arrangement in a classic back and forth groove/thrash arrangement that again harkens back to the 1980’s with a lot of Anvil/ Exciter textures.

Admittedly the appeal to most may rest on the voice of Tyler Knapp. He has one of those barking deliveries that can be a little throaty at times or monotone in others (check the aforementioned “Killing Machine”), but isn’t necessarily a major deterrent to overall enjoyment. There are times you just wish he would rear back and sing, a la Halford or Dio – we’ll have to see if this is an aspect that comes up on the forthcoming full-length that Dark Ministry is currently working on.

The Sermon Begins gives the fans a quick glimpse into Dark Ministry’s metal outlook – and it’s a promising one indeed.