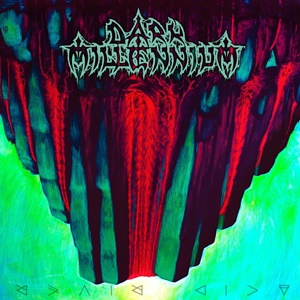 Originally developing their doom/death metal platform in the early 90’s, German act Dark Millennium split after two albums in 1993 – resurrecting in 2016 with their third album Midnight in the Void. Their latest album Acid River as their fifth record appears to be throwback in nature in more ways than one – as the band members chose to take an analog route, using original equipment of guitars, amps, and drums to mixing and tape machines for capturing that old school spirit and sound. The seven songs possess a running story theme (without being conceptual) around the ‘acid river’ – ironically all clocking in at the seven-minute mark per track, the diversity contained within enough to provide numerous earworms throughout the record.

The unmistakable growls and savage roar emanating from the voice of Christian Mertens contain the right bone chilling mechanics as well as surprisingly measured, deep clarity to embody pioneers from John Tardy of Obituary to Martin van Drunen of Asphyx on the head crushing “Threshold” or semi-progressive, Middle Eastern flavored “Vessel”. It’s invigorating to hear layers of guitars, bass, and keyboard segments plus open clean accents or atmospheric touches – the measured, circular licks that kick off “The Verger” give chase to tribal fills and doom/mid-tempo activities, riffs and transitions bringing everything from early Paradise Lost and Celtic Frost to Pestilence and Voivod to mind depending on the sequence under the microscope. Moments of trippy, alternate universe ambiance hit the senses (especially the carnival-like opening to “Lunacy”), adding another layer of intricacy to a heavy, somber outlook in terms of the tones and feeling one gets taking this material in. By the conclusion of “Death Comes in Waves” (the extra female background vocals providing that alluring positive touch), you get the sense that Dark Millennium are reviewing their early creations and putting their experience and seasoning into a 2021 context through this latest set of songs.

Acid River won’t be an album probably talked about in most circles for going against the grain or pushing new territories for doom/death followers. That’s okay though – there’s plenty of room at the table for tried-and-true principles encapsulated in a sound you don’t hear too often in modern times.