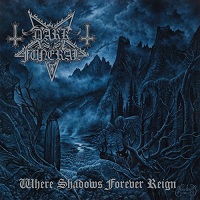 You think of Dark Funeral, then you start to think about Marduk, who come to think of it, have always been more productive, forward-thinking, and ultimately, better than Dark Funeral. Food for thought. Dark Funeral have displayed an uncanny ability to be unable to get out of their own way, whether it’s because of a flurry of confusing lineup changes, long stints between albums, or in this case, their unwillingness to deviate from their core sound. On their sixth album, Where Shadows Forever Reign, the menacing Swedes appear to be out of gas…and ideas.

Band leader/principle songwriter Lord Ahriman has basically cornered the furious, blasting, unrelenting blast-happy black metal sound. And really, if you’re looking for a prime example of this particular black metal subset, then it’s Dark Funeral. They’ve been doing it hardcore since 1993, after all. (Note: 1998’s Vobsicum Satans is probably where they peaked.) Therefore, it’s with little surprise cuts like opener “Unchain My Soul,” the pillaging “As One We Shall Conquer,” and “The Eternal Eclipse” basically fly off the rails, albeit in a controlled, almost mechanical fashion. It’s the same combo: A barrage of chord-y tremelo riffing, syncopated barking from new vocalist Heljarmadr, and an endless barrage of drums. Suffice it to say, it can wear thin pretty quick.

Attempts at moving into mid-tempo territory suffice. “As I Ascend” is a quality plunder into melodic black metal realms, a place Dark Funeral has randomly scraped over the years. Yet the obvious issues with Where Shadows Forever Reign remain: it’s just another functional Dark Funeral album, really. Being that this is their first foray on Century Media (who rescued the band from label purgatory after Regain Records went belly-up), you’d think Dark Funeral would make a significant effort toward expanding their sound. Instead, it’s the same old caked, dry corse-painted, ’90s-all-over-again effort.