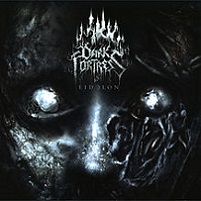 Given a ringing endorsement by Tom G. Warrior of Celtic Frost, Germany’s Dark Fortress (why such the unimaginative name?) have received a nice little push from Century Media, who must feel like this is 1997 all over again when their Century Black imprint ruled the roost. Their newest effort, Eidolon (no, not the band that gave Mustaine two more ‘yes-men’) is a slightly above-average affair of modern black metal, devoid of any real hooks or outstanding moments, but with enough gusto to just get by.

Songs like “Cohorror” and “The Unflesh” blaze by with the par-for-course BM elements such as swift chord runs and blast-happy segments that give these songs some ammo strong enough to make this a competent listen.

However, a certain level of sameness occurs once past the halfway mark, as “Edge of the Night” and “No Longer Human” fail to enact any sort of key dynamics. Dark Fortress runs into a wall with these tunes a few others, perhaps giving headway to the band’s need for more growth.

Recommended stuff only if you’re looking to beef up your BM collection, Eidolonhas some blatant flaws, but some moments and ideas that show Dark Fortress could do something of worth with the German BM template. Then again, the number of high-profile German BM bands is minute, so perhaps these guys will have to go back to the ‘ole drawing board.