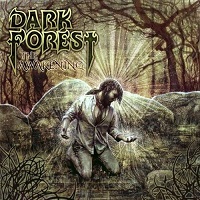 The pleasing sound of a twin guitar harmony – cemented by Maiden, expanded upon by Gothenburg – is the primary component to Dark Forest’s third album, The Awakening. Most bands of this lot (see: epic traditional metal) use harmonies only to buffer NWOBHM plunges, or even the rare thrash maneuver, but here, Dark Forest use them indiscriminately, near to the point of overkill. Yet, a good harmony is usually a memorable one, which is the primary reason why The Awakening is able to make hay.

Positioned conceptually to demonstrate that man and nature are permanently intertwined or “one,” The Awakening is as it should be, a broad, involved listen. One could nick a few songs from the running order for singular use (see: “Rise Like Lions” or the punchy “The Last Season”), but getting into the flow and through the harmony gauntlet is essentially a means to a relatively enjoyable end for Dark Forest. And really, who of the Maiden/Priest/Riot angle isn’t going to find something of value contained within the billowing melodic fray found on the opening title track, “Sacred Signs” or “Sons of England?” This stuff is tailor-made for that fraction.

Vocalist Josh Winnard could find himself as the primary beneficiary of the mounds of guitar candy here. While his cleans aren’t clearly defined (they’re like a more ragged John Arch), he provides ample character and inflection, particularly when the aforementioned harmonies start a-flowing. Even so, The Awakening is one of the spare albums in this realm where the vocalist is secondary, which should work in the band’s favor as they continue to build upon the already solid Maiden-and-beyond template they have in place.