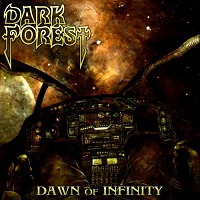 A British take on power metal, by which judging a book

by its cover (is that a Star Wars cockpit?), means Maiden will referenced more than a few times. Sure enough, they are, as Dark Forest finds every excuse to doll out twin guitar

harmonies like Maiden on their second album, Dawn of Infinity. The only thing missing is a mascot. Maybe next album, eh?

Double-bass laden power metal this is not, so Dawn of Infinity merrily shuffles through the forest of gallops and mid-tempo rockers. Opener “Hourglass” is a worthy start, but when the chorus hits and singer Will Lowry-Scott tosses in some “Oh’s and ah’s,” it’s practically kills the song

. Lowry-Scott is one of the album’s biggest deterrents, for his monotone and flat vocal style doesn’t have the balls to convey the band’s flat-footed compositions. “Under the Greenwood Tree” might be his only saving grace here, the only song with any semblance of passion.

Because Dark Forest is so privy to twin guitar melodies, most of them lose their luster upon impact. When combined with the heard-it-all-before melodic structure of most of these songs

, Dawn of Infinity struggles to find its voice in a crowded pack (er, forest). It’s not all a lost cause, with “Through the Glass Darkly” managing to pique some interest thanks to some brooding riff action

, and “The Stars of My Destination” possessing some minor flash and pizzazz In the end, Dawn of Infinity comes across as staid and predictable, and is a rare miss for the usually dependable Cruz del Sur Music.