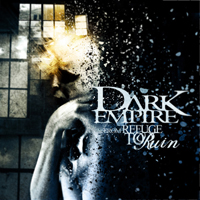 Walking a fine line between power metal, progressive metal and the more melodic elements of thrash, New Jersey’s Dark Empire have crafted a fine album for their third outing and their first with new recruit Brian Larkin behind the microphone, replacing the departed Jens Carlsson. Larkin’s vocal style is a blend of Warrel Dane (Nevermore) and James LaBrie (Dream Theater) that really suits the musical direction they’ve taken. However Dark Empire just aren’t going to appeal across the board though, the vocals especially will be divisive among listeners.

Those looking for Opeth style proggery will also find From Refuge To Ruin lacking. On the other hand, if well crafted songs which aren’t shy about letting loose with infectious melodies or a bit of heft tickle your fancy then you’ll be more than happy here, especially since Nevermore haven’t released anything this year and you might just need to scratch that itch.

Starting off on a strong footing “A Plague In The Throne Room” has elements of Dark Tranquillity getting busy with Nevermore, an upbeat riff-fest centred around a great chorus. Simply put, it’s satisfyingly epic and boasts strong writing. “What Men Call Hatred” again opens like Nevermore, with staccato riffs in the verse giving a real sense of movement to the song while “The Crimson Portrait” again wears the Nevermore influence openly, especially in the vocals. However it’s no bad thing with quality guitarwork throughout and a chorus brimming with passion, fire and loads of room for Larkin to soar when the riffs slip back into semi-chugging mode. Attempts to mix it up can be found in “Dreaming In Vengeance” which has a slight Eastern tinge towards the middle, but it’s when they go for the push and power (“What Men Call Hatred,” “A Plague in the Throne Room”) that they hit the mark best.

The title tracks weighs in at just under ten minutes, starting off in ballad territory and sliding into a mid-paced, air punching tune. It kicks off, but to be honest, it’s a little forgettable and the use of flute is a strange choice, adding to the medieval charm. Just don’t expect anyone to shout “aqualung.” It does move into a fine mid-section of ever increasing guitar notes fed out over great drum-work. They then go for the final push on “The Cleansing Fires” clocking in at almost 14-minutes, it sways from subtly to full on heaviness remaining engaging throughout, but once more lacking that killer element, which the likes of Opeth seem to seep.

Dark Empire do sprinkle enough melody and hooks throughout to catch the casual listener unawareness and there’s be plenty of cross-over appeal on show to get them onto your favourite internet rock station. As a final note, while you’ll find references to Nevermore popping up throughout don’t make the mistake of thinking that Dark Empire are mere clones. They’ve got enough of a prog infatuation to take them past just that, it does seem to be the general road they’re travelling now with Larkin lending his voice.