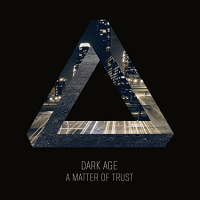 Emblematic of how only a European metal band could get away with incorporating snyth-pop ideas into the core of melodic metal, Dark Age are an interesting proposition, one that many folks seem to be unsure what to do with. It’s like they’re aiming for the In Flames/Raunchy target, but trying to dabble in regular melodic metal avenues, a lot of which sound more alternative than anything to these ears. Never the matter, for there’s some hook and lines on A Matter of Trust (the band’s sixth overall), enabling the band to keep things interesting while they try to take the commercial bait.

Once the piles of electronics are pushed out of the way (willingly), the core of Dark Age reveals a sort of sub-Soilwork, just without the attack. Thus, there’s some girth and edge to numbers like “Out of Time” or “My Saviour,” which unfortunately, heads down some rather noticeable Linkin Park paths. Big ‘ole thumbs-down for that. In spite of the obvious radio-ready leanings, one can identify with the hook-oriented vocals of Eike Freese, who stretches out on the spiced-up “The Great Escape,” as well as the warm “The Locked-In Syndrome.”

The spiraling melodies and tightly-wound song constructions help keep A Matter of Trust moving along, making it an album that will only click for those with the sense and sensibility to grapple with king-sized, syrupy hooks, and the occasional flirtation with early 00’s Scandinavian melodic death metal. It’s a coupling that either floats or doesn’t…Dark Age appear to be close to clinging to a life raft with A Matter of Trust.