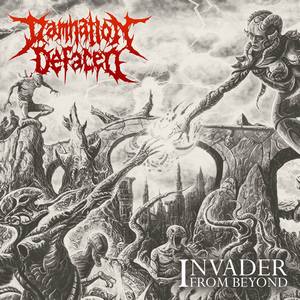 Death metal that is melodic doesn’t have to be lacking in intensity. Nor does it have to be “melodic death metal.” If you can grasp those two concepts, you have a pretty good idea of what to expect with Damnation Defaced, and their third full-length output, Invader from Beyond. While they bring in some modern, electronic/synth trimmings on occasion, this is not to be mistaken for something without bite.

Romping and stomping through mid-tempo thunder much of the time, Damnation Defaced keep things heavy, melodic, and moving forward. The tempo does well for groovier bits that are sprinkled into the tracks, and helps accentuate the melodies to reach their full potential. In death metal terms, think more along the lines of Hypocrisy than acts like Arch Enemy or Soilwork (also with regard to sci-fi lyrics). The guitars have a good level of crunch to them, which gives it more of a genuine death metal weight to it. Much like the recently released Dawn of Disease, no one is going to lump this into the melodeath pile, even if some of the guitarwork on “The Creator’s Fall” is downright splendid. The small amount of electronic help never comes across as too modern, but does help to give the band more sound to work with rather than just relying upon guitar melodies – just allowing for more diversity in presentation, as well as aiding the sci-fi themes. Rounding things out is vocalist Philipp Bischoff, who brings his most abrasive growl (with a few moments of variety, like with “Embraced by Infinity”), meeting the genre standards, but not much on the originality end.

Solid, mid-tempo death metal with an ear for melodies is what you’ll find with Invader from Beyond. While it does try to break away from the genre norms, it still finds itself in well-treaded territory. But that’s no reason to fault it if. Nothing wrong with some groove and headbanging riffs to get one through the day.