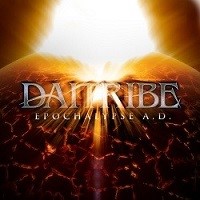 Without having to read too much on Chicago’s DaiTribe, one has to figure they were brought up through the 90’s metal bar scene. During that no-so-awesome period in American metal history, swiping Pantera riffs and its attitude were the way to go, and just like bands from the 80’s have a hard time of letting that era go, the same bodes for bands who came up through the Clinton administration. All the band’s Epochalypse A.D. does is remind us of how poorly 90’s metal translates two decades later.

With a lone guitar lineup formation (ala Pantera) in tow, DaiTribe’s riff and groove-based approach has some serious kinks to iron out. Specifically, the band’s rhythm section has a difficult time locking in, leaving some of these songs (see: “Loss By Distance”) to feel all loosey-goosey. Not helping matters is a compressed and flat production job courtesy of the normally-reliable Sterling Winfield (Pantera, Mercyful Fate). Frankly, had DaiTribe decided to speed the tempo up, the album would be a dead-ringer for a C-grade thrash album.

As expected, lyrics full of posturing, and “I hate myself and you because you betrayed me”-styled lyrics are on display, with singer Rich Collins utilizing a snarky Anselmo-belch. Attempts at clean

vocals on “Sanctuary” and “This Hell” sound largely forced and uncomfortable, thus thrusting the band’s bar chord-happy riffs to the forefront on “Betray,” “Crime Legacy” and “For the Sins.”

Bands of this ilk (Misery, Legacy of Disorder, etc.) have proven to be largely unsatisfying primarily because they have very little to go off of other than the Pantera/Machine Head combo. With Epochalypse A.D., DaiTribe don’t exactly make inspire one to reach for Burn My Eyes or Far Beyond Driven. Rather, they prompt one to reach for something a bit more cerebral and challenging.