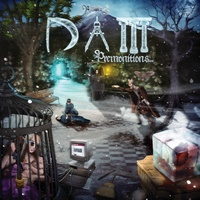 Brazil’s melodic death metal bunch D.A.M. have been a productive group. Within 2013 and 2014 they managed to put out 2 EPs and 2 full-length albums. Taking a moment to catch their breath, Premonitions is the first output since that period, and sees the band returning to familiar territory. Premonitions is a 6-track EP, but with a runtime of 39-minutes, you are going to get your money’s worth.

D.A.M. stick to what works within the melodic death framework with their latest EP. Hitting the more modern edge of the genre, there’s plenty of keyboard work that intertwines with the melodic riffs. It almost goes without say that there’s some Children of Bodom/Kalmah influences on this end, as well as some of the fast tempo riffing of a band like Mors Principium Est. There are some female vocals that are also added in on “Untouchable” but they feel a bit weak, almost like they needed to be higher in the mix. Other than that slight misfire, the rest of what D.A.M. is producing on Premonitions is sure to provide plenty of smiles on the melodic death front, even if it sounds somewhat familiar. The melodic and galloping riffs of “Anorexic Disphoria” (along with its snappy synths) and the epic structure of closing “Frustration,” complete with acoustic guitars and Hammond organ are sure to give listeners a kick.

If it’s not broke, there’s no need to fix it. While it may limit D.A.M.’s ability to break out further, the obsessive melodic death metal fans will easily find favor with the music found within. Premonitions is full of energetic and catchy melodies, and there’s always room for that type of energy in this particular field.