Cyhyraeth – Servant to the Fire (Self Released) 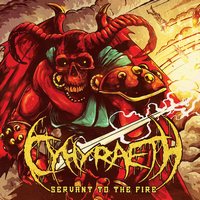 A bunch of kiddies, no doubt not quite at drinking age, who probably would rub uptight metal dorks such as this scribe the wrong way with their inability to name a metal album before 1990, but, are competent beyond their years, Cyhyraeth is a Dallas-based modern death metal outfit, with a quality debut to their name in the form of Servant to the Fire. Furthermore, and perhaps most intrinsic given the metal’s proclivity for such things, they are female-fronted.

Vocalist Jessica McCain does the growl/sing thing rather well, managing to kick out some clean vocals that hardly annoying, but more harmonious than anything. She has the man-dude bark down, not terribly out of the way of what Angela Gossow and for a modern reference, Alissa White-Gluz is doing. Her best moments come in the chorus on “A Farewell to Harm,” which serves as the album’s most dynamic cut, where melodic solos come to the fore along with McCain’s well-executed soft vox. It’s a song that almost belies the band’s age, meaning, perhaps they have gleamed all the right things from bands circa 2000 and up. We think. Additionally, Cyhyraeth has done an optimal job of avoiding most, if not all the trappings associated with modern “death metal” (notice the parentheses) by foregoing uber-lazy beatdowns, and mindless chunk chord riff-action.

As it stands, for a relatively fresh-faced band of teens, without a record deal, with nominal experience, Servant to the Fire is a sterling accomplishment. Surely many of us who have done time in pre-college bands would do a hand-stand if their amateur albums sounded like this, but it shouldn’t diminish the fact that Cyhyraeth are pretty legitimate, quite pro, and, have a leg to stand on in this current environment.