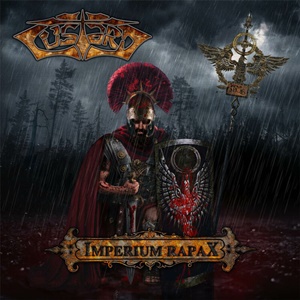 Tried and true Teutonic power metal has been a staple of the scene since the 1980’s – domestic bands like Custard a part of that tradition for decades. Only drummer Chris Klapper remains from the original lineup, now arriving at their seventh studio album Imperium Rapax – four years after their last outing A Realm of Tales. Developing a record around the history of the Roman Empire, all the expected bells, whistles, ambiance, and context under consideration along with conventional battle hymns, culturally enticing guitar runs/melodies, moving tempos, and mountaintop vocal delivery to hammer these tracks home.

Whether going full bore, slower and more thoughtful, or marching at a mid-tempo clip, Custard garners a familiarity because of specific hook/melody choices and performances that live within the ideal power metal playbook. The undeniable twin guitar harmony circular run during “Res Publica”, the calmer narrative setup before regaling the loss of a battle theme in “The Goddess of Magic and Death” for singer Oliver Strasser to channel his frustration and woe in a multi-octave, impactful manner, or the older Running Wild/Blind Guardian-esque call to arms galloping nature to “Children of the Wolf” all present and accounted for to keep the record diverse and dynamic, ears perked up at attention. Exemplary moments come up in the smallest places – the stunted guitars against a normal metal to the bone foundation and supplementary distant choir/background voices for “Blessed by Baal” as well as the crunchy, speedy to open chord transitions and keyboard splashes during “Ode to the Flames” deserving fever-pitched audience approval. The usual suspects come about for execution and songwriting models (Grave Digger, Manowar, the aforementioned Blind Guardian and Running Wild) – so it’s not exactly an original take on the genre, more so just keeping within the boundaries and decency of what people have come to expect from these artists.

Imperium Rapax straddles the Teutonic power meets old school British working-class angles into a record that is surprisingly addictive, the storyline mirroring the tumultuous Roman Empire times in a cohesive fashion. No better place to start if a newcomer to this five-piece than here.