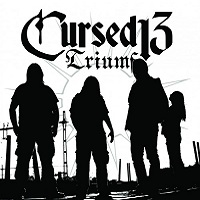 As the story goes, the early 90’s Stockholm bands (Nihilist, Dismember, Unleashed, et al) would get together on a Saturday, head down the local subway, set up camp, drink, and blast metal all through the night. In essence, they were scraggly metal dudes dressed up in leather jackets and ripped jeans, drinking skuzzy beer, and having a carefree time. It was an idealistic time that will never be matched, yet the spirit is echoed through a small amount of bands, one of them being Sweden’s Cursed 13, who rip and tear through 11 songs on their Triumf debut.

Inaccurately described as a black metal band, Cursed 13 has the required snarl and abandon of the early 90’s horde, just without some of the technical happenings. The songs here don’t feel as clunky and chunky as one would initially surmise; the deadened atmosphere on “I Love Cyanide” being one such example. Yet the all-Swedish surge of “När marorna kallar” is raw and uncorked, with a swift little verse to complement the blood-saliva vocals of Heljamadr. Keep close tabs on the bountiful doom on “Seductress” (love those simple chugs) and upwards death/thrash of “Vrede,” too, for they both provide some surprising balance, something that becomes more evident with repeated listens.

The safe route for Cursed 13 would have been for them to huddle up with the usual and pre-meditated sonic persuasions, as in, the note-for-note representations of the old Swedish DM guard, but that’s not the case with Triumf. It’s a pretty varied body of work, perhaps more intelligent than we give it credit for, meaning that we could be all wrong about Cursed 13 being prime co-conspirators in the Stockholm subway haggling after all.