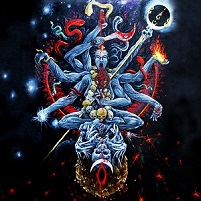 Cult of Fire are boundless disciples of occulted black metal, but also exotically visionary artists, and they are the Czech trinity of Devilish (vocals), Infernal Vlad (strings), and Tom Coroner (percussion). Put on your black robes and pointy hats, but approach Ascetic Meditation of Death with an open mind, there is something different about this ritual.

Devil worship in black metal is traditional, but typical, so why not revere another deity? As unmistakably seen on the album cover and logo, Cult of Fire honor and summon Kali, the Hindu goddess of death and time, renowned as the Dark Mother.  In its violent representation, the artwork is accurate to her customary portrayals, counting the decapitated demon’s head held in one of her multiple hands, the bowl of blood, various weaponry, necklace of skulls, and Shiva’s body beneath her, although he’s usually not decayed to a skeleton, that’s one of the artist’s revisions. The artwork and both new logos, one in Theban (the alphabet of Wicca) and the other in Sanskrit (the alphabet of Hinduism), are by Slovakia’s Teitan Arts a.k.a. David Glomba, who has also designed for Inferno, Evil, and Infernal Vlad and Tom Coroner’s side project, Death Karma.

What would a Hindu goddess-themed album be without a sitar? Not one from Cult of Fire. Yes, they’ve taken the beautifully enchanting sitar and brilliantly incorporated it into their flamboyant style of black metal. They also chant a mantra to the great goddess in “Kali Ma” with an epic instrumental movement. Reflecting their darker side in “When Death is All,” Devilish’s name speaks for itself when he lashes into a malicious growl from the start.

Who knows, with influences like Cult of Fire, maybe this will be part of a whole cultural turnaround or enlightenment for not just metalheads, but yogis, moldavite-lovers, Hindus, and neo-hippies. The interminably virtuosic cult of black metal shall seize all with a desiring will to listen. Really, even those who mediate against their fears of the dark and hold repugnance for the wicked cannot resist Ascetic Meditation of Death. As us followers say, come worship the fire.