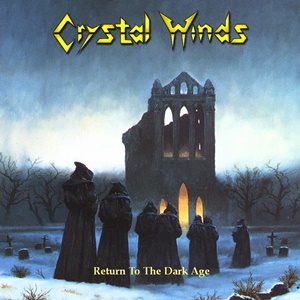 Originating in 1999 and releasing their first demo Scepters of Eternity in 2004, Crystal Winds disbanded later that year and reunited in 2013. They since recorded a self-titled EP for Eat Metal Records issued in 2016 – leading us to their first full-length in Return to the Dark Age. This isn’t an uncommon tale for many Greek bands – the tools at their disposal with home studio technology and know how to use it at their virtual fingertips compared to the days of professional studios and bigger, by the hour sessions to pay for. One only hopes that the wait is worthwhile for a seasoned act in the classic heavy metal platform to finally reach this stage of their career.

Familiar strains circle the aural landscape for specific guitar riffs, fluid/ progressive bass lines, in the pocket drumming with energy bursts during the fills, as well as loud/shrieking vocal melodies. It’s evident that these musicians grew up on a steady diet of the NWOBHM, classic hard rock, and the European / US offshoots. The bluesy, ripping foundation of say AC/DC and Motörhead during “Gods of Rock N’ Roll”, the dynamic mystique with clean guitar lines and almost whispering verses of Rainbow and Judas Priest during the dramatic ballad “Dream Queen”, as well as the straight-ahead marching anthem “Mean Queen” provide ample diversity. Even doom and epic influences creep in through various arrangements, the thunderclouds and bells that signal the eight-minute plus “Still There” sure to appease those who love Warlord, Candlemass, or even Manowar as the guitars, drums, and bass each take their turn to set the atmosphere in a driving march to battle. The struggle for full enjoyment lies in specific details where the band drive certain riffs home to rigid, robotic measures – devoid of the right human touch – as well as the warbly, uneven nature to vocalist Andreas Kouratoras’ upper register. It’s probably a case where the band did the best they could within budget constraints – you just hope next time, they’ll seek out a seasoned veteran behind the boards who can get this material and the performances a bit more on the right track.

Kudos to resurrecting their creative endeavors this many years beyond the start. For Crystal Winds to make it beyond Greek shores in terms of appeal though, they need to tighten up some of the songwriting, dig deeper into giving a more jovial performance, and maybe more people will be willing to listen again.