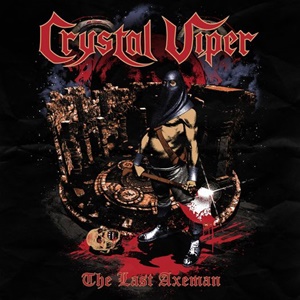 Much like other musicians cooling their jets at home while awaiting live show opportunities to return, Crystal Viper decided to pull together another release for The Last Axeman. Although considered an EP by the band, the eight tracks clock in at 36 minutes – providing adequate value for the listeners. Encompassing everything from re-recordings to new songs, covers and live in the studio versions of tracks from last year’s The Cult effort, no one will question the commitment and belief to traditional, pure heavy metal present throughout.

The title track originally came out on the band’s debut album The Curse of Crystal Viper in 2007 – obviously gaining the benefit of stronger production values and modern equipment upgrades, a power/speed effort that blazes as Marta Gabriel’s solid, metal to the bone vocal melodies and guitar work with Andy Wave and Eric Juris shines. The latest song “In the Haunted Chapel” contains infectious, mid-tempo guitar harmonies throughout, an anthem in more of the classic Judas Priest/King Diamond mold where drummer Cederick Forsberg flexes his groove/power skills to the max while the lead break features circular Iron Maiden/Thin Lizzy-esque cultural moments beyond the flurries of shredding. The two covers from Russian act Aria and the UK legends Diamond Head alert followers that these musicians know their craft and deep affinity for the genre – “It’s Electric” a deeper cut from Lightning to the Nations that pulsates, the crunchy riffs and music/vocal volleys very engaging. Side B contains the RockOutSessions from The Cult album, showcasing Marta’s high-octane melodies and diverse musical interplay between the other members – “The Cult” and “Whispers from Beyond” standouts for the mix of faster and epic/steadier anthem diversity the band can deliver with the individual arrangements.

Probably a stop-gap release that the casual fan may pass on compared to the ardent collector, Crystal Viper continues to remain a potent force for classic, true heavy metal and should continue their ascent in the hearts of all metalheads globally through another fine record.