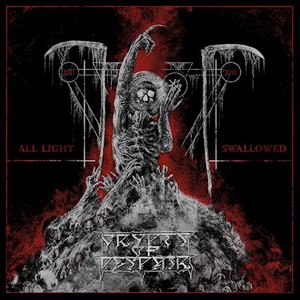 As it is often said with lots of death metal nowadays, it is important for a band to remember that death metal isn’t supposed to be sterile. There needs to be a certain level of darkness to it, and some bands like to embrace emotions such as anger or fear and incorporate those effectively into their sound. It’s what makes it sound like death after all. Crypts of Despair certainly command this idea well when listening to their latest effort in All Light Swallowed.

It’s heavy, and it can rumble like a tank when it is going through the mid-pace material. But lots of bands can do that piece without fail. It’s visceral and has a certain level of immediacy to it as well, the sort of thing that can hook you in on the first listen. But again, that’s a quality shared by many in the genre. The piece that stands out to this scribe is how they can do all of these things meant to fall within the death metal playbook, and add in a dark and horrific atmosphere without taking you out of the moment when the full blitzkrieg approaches. Atmospheric death metal bands borrow from the Gorguts and Ulcerate playbooks, but often end up with something that’s less ‘in your face’ as a result. A track like “The Great End” stays ferocious at all times, while nestling in these more otherworldly and atmospheric qualities, and is all the better for it. The band does a great job at utilizing bleak melodies and giving them their due, without altering the frenetic formula. Part of this stems from a shorter track focus (generally closer to the 4 minute-ish range), and not overdoing the melodic piece. Even a song like “Disgust,” where the darkened melodies are in full swing for much of the track, it still hits plenty hard throughout – conjuring the vision of a creepy, otherworldly plane that demands your attention.

Thrilling death metal savagery with plenty of foreboding, murky qualities catch your attention? Crypts of Despair craft a riveting listening experience that hooks you immediately and simply refuses to let go as it drags you across bleak and terrifying worlds.