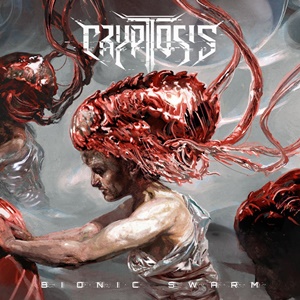 Risking possible alienation from an established thrash base, Dutch act Cryptosis is reborn in an extreme technical, progressive thrash way that has expansive horizons on multiple sonic levels for their debut album Bionic Swarm. Many in the underground probably know this trio in their previous Distillator incarnation from 2013-2018, they released an EP, two full-lengths, and a split outing with Space Chaser. Taking on a sci-fi concept that includes relating to the ability to purchase digital thoughts and enhance knowledge through deceased bodies, expect a rather impressive density of blitzkrieg riffs, solid shifts, and dynamic atmosphere swings track to track that prove these musicians can craft some thrilling arrangements that dazzle through higher musicianship ability than most people can muster on the planet.

The riffing and rhythm section interplay combines elements of jazz/progressive movements and even blackened/symphonic angles that push the band beyond what you’ve heard in the past from artists like Coroner, Vektor, and Demolition Hammer among others. Brilliant harmonization and tapping from guitarist/vocalist Laurens Houvast set the stage for some sophisticated supplementation from bassist Frank te Riet and drummer Marco Prij during the energetic double salvo for “Decypher” and “Death Technology”. At other times the three-piece assault the listener from a jagged Voivod meets Megadeth volley, lobbing heavy progressive parts that have this moving groove aspect that causes spasmodic turmoil in the air space – “Conjuring the Egoist” pummeling along with the gang-like vocal support to hopefully be a Cryptosis mainstay live. Allowing other tracks a bit of breathing room at slower paces, “Mindscape” adds in ethereal voices and the use of a mellotron, the guitar play injecting some blackened nuances while Laurens barks out his main melodies in a fierce manner a la Gojira meets Evil Invaders, going for that piercing scream to punctuate specific words or phrases. At ten tracks in under thirty-eight minutes, the band understands there’s plenty to digest and encode, leaving the listener satisfied at the sheer intensity and sophistication displayed in a tight window.

For every band that wants to go down a familiar influence tree in their thrash base, Cryptosis dive deep into a progressive, technical turn that many will find exhilarating with every song, EP, and album that hits the streets. Bionic Swarm buzzes, nosedives, soars, and leaves you drained in a great manner – a metal record that you’ll gain even more from first listen to your last.