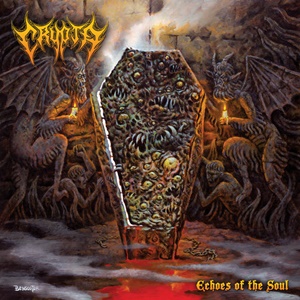 Originally developed as a side project only to transform into a fully active unit, Crypta is a quartet of musicians with previous ties to acts like Nervosa and Burning Witches among others. Although having experience in the traditional, power, and thrash realms, Echoes of the Soul as the debut offering showcases more of an extreme death/blackened approach – not forsaking those previous influences to add distinctive touches in their style. Recording the album over a month stretch in Brazil during an available window in the throes of the pandemic, its evident that these ladies deliver a savage and brutal set of material, laced with intensity, fierce songwriting, and the occasional melodic aspect in specific guitar lines or riffs that should get heads turned and meet with mighty approval.

Most who are familiar with the work of bassist/vocalist Fernanda Lira and drummer Luana Dametto from their efforts in Nervosa may be surprised by the viciousness displayed throughout on both their parts. The former taking her raspy delivery into the bowels of hell, adding a blackened scream and larger than life, discernible growl to the mix that makes “Shadow Within” and “Starvation” bone chilling – while the latter can throw down sick blast beats and slower, lurching death grooves song to song, as “Possessed” and “Under the Black Wings” illustrate. As guitarists Sonia Anubis and Taniá Bergamaschi wield sick tremolo picking and speedy death riffs but intertwine some melodic tendencies especially in specific lead passages to allow the listener special runs for retention – check out “Kali” and closer “From the Ashes” in that regard. Even some thrash and punk/d-beat elements factor in from time to time – but overall, its obvious that influences from the 90’s Florida scene (Death, Obituary, Morbid Angel) and the Polish movement (Vader, Behemoth) come to the forefront for the aggression, versatility, and underground impact these acts have made over the decades. The primal tones and production values keep Crypta’s sound immediate and as in your face as possible – translating to certain effective brutality across audiences worldwide when these songs make it to the stage.

Already garnering praise from previous acts, Crypta has an immediate buzz factor that should translate to a solid following even as things move into more extreme angles. Echoes of the Soul checks off all the boxes for solid musicianship, killer songs, and that potent intensity most expect in a blackened death metal group.