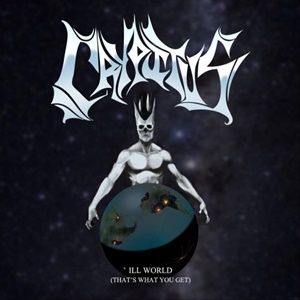 For those unaware, Rutland, Vermont is in a remote section of the state – plenty of hills and mountain scenery to take in on the backroads should you want to explore the area. It’s also where this thrashing, progressive extreme act Crypitus call home. Together for five years, they’ve released an EP and single setting the stage for their first full-length, Ill World (That’s What You Get) – which on the surface would seem like an EP at only six tracks. Considering the band average over six minutes per track (with “Danger” the longest cut at 8:47), they have every right to assert the album tag on this one.

The approach for Crypitus is very unorthodox – assembling a wide array of influences and musical thoughts that can be melodic and morose one moment, then punk/death/blackened with all members going full tilt for punishing emotional magnificence. Dig deep into “Danger” and you’ll hear all aspects in this one track – midway through hitting a doom/groove stride with a circular lead break that’s quite infectious, then the extreme caustic vocals and punk/hardcore tempo change the feel of the song again. It’s like the band explores the outer realms of their sound, enjoying contrasts and the push/pull of surprising transitions to hit upon some jackpot aural sequences that you just aren’t hearing from most bands these days. Guitarists Doug Friend and Peter Snee set up a dissonance at times and then build off segments into a progressive rock/jazz meets thrash chess match, as the instrumental “Symphony 1” achieves” that would make Voivod, Rush, and Megadeth fans very pleased. The sound is intentionally raw and a bit jagged – almost as if you would appear to hear them just at louder volumes when playing out live. Doug as a vocalist spits blood with his rhythmic patterns, occasionally injecting some alternative, monotone-like dirges when necessary to service dynamic appeal to the verses/choruses – but you believe his venomous rage when taking in “Thunder” as percussionist Zach Patch rolls out triplets, bell hits and double kick/fills like an octopus using all tentacles for sonic embellishment.

Crypitus are musically adventurous while aggressive in their combinations – which makes for a very entertaining product that should take multiple listens to absorb all the content. Ill World (That’s What You Get) keeps the band in their unique lane, sure to appease most and probably send other running for the hills. Superb and making this scribe clamor for more. 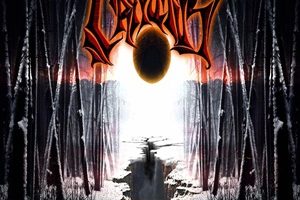