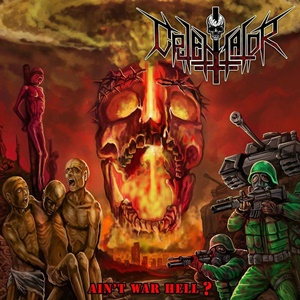 Starting a band in late 2015 after playing together in the brutal gore band Bowel Stew, guitarist Omar and drummer Riccardo felt the need to express their abrasive old school thrash affinity in a newer band, thus Cruentator is born. This quintet remembers that undercurrent that took primitive, raw thrash riffs and tempos during the 1980’s and turned up the speed and viciousness, to the point where it almost seemed like a thrash/death crossover. For Ain’t War Hell?, Cruentator rifle off eight salvos of non-compromising metal, armed for attack in a manner that will remind many of early German thrash and the second breed of American bands like Demolition Hammer, Sadus, or Morbid Saint that double down on intensity.

The material gravitates to of course speedy picking, lighting fast lead break runs, and snare/kick drum hits that circle at feverish paces – but the transitions can be just as exciting in terms of musical flair and devastation. Ambro as a singer mirrors Mille of Kreator, alert in keeping up with the rapid-fire proceedings in that caustic high-pitched roar for “Evil Is Prowling Around” while calming things down during the chorus or latter verses for diversity’s sake. Many of the guitar riffs build off start/stop tradeoffs before kicking into gear – the accents giving “The Nightstalker” added melodic enhancement as Riccardo doubles up with the guitars for entertaining snare snap maneuvers. Nothing extraneous about the execution or output here – from the opening snare hits on “Merciless Extermination” to the vicious uprising of closer “Cluster Terror” the band guarantee every ounce of energy and focus is 100% on the music, belief and commitment to a cause that revels in aggression and velocity. Mining war-torn themes for the lyrical content, the animated cover doesn’t mince words for its bleak imagery either.

Ain’t War Hell takes this scribe back to a mix of early Kreator/Sodom against the late 80’s/early 90’s speed output of Sadus and Demolition Hammer – making for a sweat-drenched outcome sure to appease those thrash hordes.