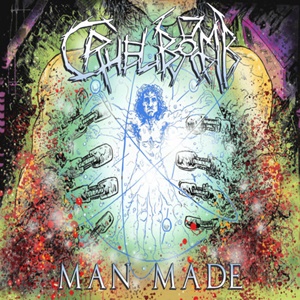 Churning out their third EP in four years with Man Made, Cruel Bomb continues exploring their affinity for all things heavy in the crossover thrash platform. A power trio lineup that has remained committed to the cause since the start of the group in 2018, it’s exciting to watch the progress release to release as these musicians gain more seasoning, experience, and confidence in spreading their songwriting and performances through the underground. Expect another quick-hitting five-track affair that goes for the jugular, raises adrenaline, and allows for optimal gang-like velocity and swirling madness in support of the music.

Privy to one song as a single released last summer, “A-10” gets a beefier bass presence against its frantic speed riffs for the EP version, the mid-tempo transitions and slight tremolo pick action contrast nicely against the main hooks, the three-piece locking into a mix of Sacred Reich/Nuclear Assault-like speed and controlled groove/crossover drumming and forceful vocals. The 51 second opener “Keystone Mosh” is an instrumental setup for the subsequent stop/start intensity of “Dogs of War”, guitarist/vocalist Brandon James pummeling the aural landscape with some fierce rhythms plus a ripping lead break, the gang-oriented chorus sure to be a future favorite for unison audience involvement. Midway through “Bombed Squad” is another aggressive winner, drummer Kyle McKeown hitting some solid double kick/fill maneuvers as well as knowing when to just ride in that comfort groove zone to let the crunch and main vocals/ supporting background casting take center stage. Elements from the old school to the new guard seep into the influence bank, allowing Cruel Bomb to perform equally well on bills with hardcore, metal, or thrash bands – the production values and tones organic, in your face, and primed for retention.

Hopefully the next release for Cruel Bomb will be of the full-length variety – not a knock on the quality contained within Man Made, it’s just that the trio have all the skills, versatility, and abilities to deliver a solid eight to twelve-track effort that should crush. Turn this up when you need that metal charge. 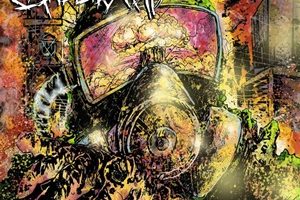 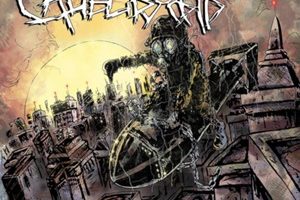