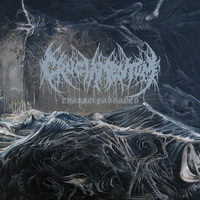 You know those bands that manage to make plenty of buzz with a few demos and EPs? Cruciamentum is one of those darlings, who took the death metal world by storm with 2009’s Rotten Flesh Crucifix and 2011’s Convocation of Crawling Chaos. It probably didn’t hurt that the band features members of the also ‘underground-adored’ Grave Miasma. After a few demos and an EP, Charnel Passages is Cruciamentum’s full-length debut, which should satisfy fan expectation.

Cruciamentum makes no excuses for what it is. Somewhat doomy (read Incantation-esque) death metal with a sound of 100% evil. It’s the type of sound that most death metal fans crave and Charnel Passages deliver the goods. There are slow and crushing sections that have an almost epic flavor (“Rites to the Abduction of Essence”), pounding and fevered riffing (“Piety Carved from Flesh”), and plenty of effective mid-tempo headbanger riffs (“Tongues of Nightshade”). All the while without sounding like a mere copy or complete derivation of more established acts. It’s a feat that is well-accomplished for a younger act. The vocals are mostly of the low growled type, but it fits the sound and have plenty of power behind them. Lastly, the production never gets too ‘cavernous’ and there is a thick and filthy approach that gives it the needed grit.

There’s a lot to like about Charnel Passages. Catchy riffs (in that death metal sort of way), a relentlessly heavy and evil sounding approach, and some solid songwriting are all highlights here. Charnel Passages makes good on the band’s sound up to this point and enhances it without fear of ‘the sellout effect’ as well. Sure to be cherished by many a death metal fanatic.