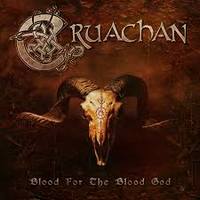 Not the first tried-and-true folk/Celtic metal band (that would be Skylad), Ireland’s Cruachan looked like they were on their way to some quality underground face-time by way of 2011’s strong Blood on the Black Rose, which was released by Candlelight. Not quite sure why the band is no longer with the label and now hanging out on the unknown Trollzorn Records (How did they get that name? Trolls + former Seattle Seahawks quarterback Jim Zorn?), but back the band comes with Blood for the Blood God, which in the tradition of Cruachan’s 20-plus years as an entity, flies the folk metal flag high.

Citing that “there’s more to folk metal than drinking songs and pop choruses” in their bio, the band doesn’t totally deviate from the course. While a good number of these jams aren’t hokey and stomp-y ala prime era Skyclad, they do have the literal bounce and mead slosh that should accompany folk metal. Prime examples include “The Arrival for Fir Blog,” which is loaded with an array of tin whistles, flutes, and pipes…all the necessary accoutrements for a folk fun-fest, really. A similar zeal is found on the enjoyable “The Marching Song of Fiach McHugh” and “The Sea Queen of Connaugh,” which translates as the album’s best number.

Mixed in are relatively hard-nosed and serious cuts, none of which can overshadow Cruachan’s penchant for writing feverish Irish tales taken right from their home country’s tremendous lore. So in essence, Blood for the Blood God is good fun, with somewhat poppy choruses, and some reliance on the “drink.” If anything, it further distinguishes Cruachan as Ireland’s legitimate folk metal answer, a hard-earned and smart place giving how imposing Primordial are these days, not to mention up-and-comers Darkest Era. Always good to have a place in metal.