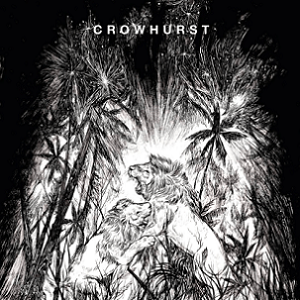 There has been a press buzz growing around Crowhurst, the one-man outfit led by Jay Gambit. The band certainly fits the mold as would-be critical darlings, playing a contrarian, noisy style of black metal that on purpose, is difficult and unyielding. But that’s all in the ear of the beholder, for many bands of the French (and to a lesser extent, American) have pulled off demanding black metal while still retaining a memorable quality. Crowhurst on the other hand, does not, with the second album II emerging as quite the sonic quagmire.

Heavy on experimentation and boundary-pushing (again, nothing wrong with that), the linear nature of Gambit’s riffs are of little value. He’s joined by Andrew Curtis-Brignell of Caïna on guitars, Matron Thorn of Ævangelist on guitars and drums, two men who have certainly logged significant hours in the unconventional black metal sphere. Operating in dissonant areas, odd chord mutations and song arrangements never quite catch on. While elements of sludge start to slip in on “Take This Pain Away,” drawn-out post-rock and psychedelia are introduced on the dragging, drab “The End.” The scattershot “Fractured Lung” turns in what could be the only true listenable moment on II, as Gambit is able to criss-cross hazy guitars with a serpentine groove, but beyond that, not much to work with.

II is a real tough mudder, to use the obstacle course challenge analogy. Yeah, it’s going to head right into the outsider BM slipstream, but it’s far from being palatable, let alone listenable. Would be wise to look elsewhere…