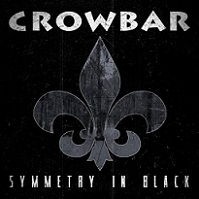 The steady paycheck and NOLA brotherhood of Down wasn’t enough to keep Kirk Windstein away from his first love, which, obviously is Crowbar. Not like he cares, but Windstein will always be third fiddle in Down behind Anselmo and Keenan, who have long been the two most identifiable faces of the band. Crowbar, though, gives the bearded fellow full creative autonomy, and the opportunity to prolong the band’s career, which has some massively underrated albums (see: 1995’s Time Heals Nothing and 1998’s Odd Fellow’s Rest). Symmetry in Black is the by-product of not only those albums, but also a band whose sound is 100% their own, which is probably why it’s so cool to hear these jams chug along like business as usual…

Parallel to 2011’s Sever the Wicked Hand, Symmetry in Black purveys those boulder-sized riff blocks. Heavy as an overweight defensive lineman, but with the tenacity of an untamed boar (don’t know why a boar came to mind – just go with it), the bundles of riffs that pop up on opener “Walk with Knowledge Wisely” as well as “Reflection of Deceit” serve notice on how a wall of sound should really be. Meaning, Crowbar is just as loud and distorted as the range of crust-punk-d-beat mongers, but with infinitely more clarity and character to their guitar ideas. Like, who is not going to pick up on the barreling run of “Teach the Blind to See” or the slow-going of “The Piety of Self-Loathing?” Classic Crowbar.

And while DR still occasionally pines for the band’s melodic side to return, the straightforward, no-foolin’ approach of Crowbar circa 2014 is hard to find fault with. Therefore, Symmetry in Black is another quality addition to a long line of albums that are some of NOLA’s finest, out-heavy-ing the likes of fellow city-goers of Eyehategod and Soilent Green. Crowbar may not have the flash, big-names, or drug-induced rap sheet of those bands, yet their dependability and thorough, unflinching heaviness is virtually unbeatable.