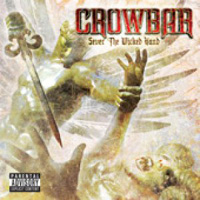 Funny how it’s taken such a considerable amount of time for people to finally give Crowbar their just due. Fact of the matter is, almost every sludge-oriented band going right now owes something to Kirk Windstein, whether they want to admit or not, and you’d have to be a total fool to undermine the quasi-brilliance of the band’s work in the 90’s, specifically Broken Glass and Oddfellow’s Rust. Pillars of sludge, those are.

Sever the Wicked Hand is Crowbar’s first album in six years, with a reinvigorated Windstein (no drugs or booze) laying down his patented wall of sound. The man’s deep and throbbing guitar tone is as unmistakable as ever, especially on the opening rumble of “Isolation (Desperation)” which gets transformed out of a sobbing melody, yet another underrated aspect of the band’s sound.

The album gradually unfolds into uniformity like most Crowbar efforts do, something Windstein has never been able to work around, even if the inclusion of female vocals and piano on “A Farewell To Misery” does add some degree of variance. Still, the crushing rhythms and Windstein’s bellowing vocals heard on “The Cemetary Angels” and “As I Become One” are as tried and true as ever, proving that no one does NOLA sludge better.

It’s refreshing to see people become re-invested Crowbar (see: the band’s first week sales of this – their highest to date), whether it’s because of Down or Kingdom of Sorrow, or even the massive sludge-doom resurgence. Sever the Wicked Hand is going to be the gateway album for a lot of ‘heads, which should put a smile on Windstein’s hardened, crusted face. Dude has been through a lot to get where he is today…pat him on the back.