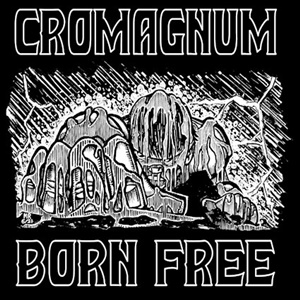 Hailing from Montreal, Canada, CroMagnum developed out of the ashes of a previous act Mad Perish – the intent to revert to older times when heavy metal may have been simpler but also thoughtful, brutal, and unforgiving. Born Free is the second EP from the group – currently existing as a duo with Maximus Rex on guitars, keyboards and vocals and Gino LaPosta on bass, M.A.D. providing the drums before leaving the band. The follow-up to 2014’s self-titled release, we have five tracks that revel in an old school heavy metal platform, although there are some power/thrash and groove aspects which enhance the output and widen the dynamics a bit.

The punchy tones and production values bring these songs a little more modern vitality than normally one would get from this style – as if these musicians aren’t just listening to their old Judas Priest, Metallica, and Motörhead records for aural history, but also appreciating a bit of Hammerfall, Primal Fear, and Unleash the Archers in the mix. Check out the shifty power riffs and complimentary rhythm section support on the energetic “Tunguska” – the classical-tinged instrumental switch midway through perfect to keep interest in this focused 2:31 arrangement. Maximus Rex knows when to inject the right harmonic melody lines to reinforce the traditional/power guitar passages – giving “Congregation” that extra aggressive propulsion. When the band wants to be more intense thrash-wise as on the title track, it’s easy to be swept up into the new whipping proceedings, the Bay Area scene prevalent in some of the musical components and rhythmic melodies employed vocally by Maximus. One area of improvement needs to occur in the main voice of Maximus – he has a hoarse-like element to some of his bellows that can be a touch off-putting, where possibly more coaching (or another vocalist) would match up better for the sake of the songs.

A nice tidy offering that whirs by in sixteen minutes, CroMagnum possess potential to get the job done for most into that traditional/power meets groove/thrash musical stew.