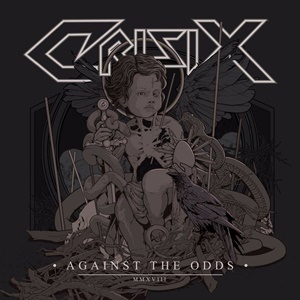 Crisix have made decent in roads with their crossover thrash sound since their 2008 inception. Winning the Wacken Metal Battle the following year, after two albums they signed with Listenable Records and released From Blue to Black in 2016 – a solid, energetic effort that slots them just below Angelus Apartida to these ears. For album four, Against All Odds appears to sharpen the proverbial axe attack while giving the arrangements a leaner/meaner sheen, elevating the groove/hook factors especially in the gang vocal/transition departments.

For the uninitiated, the quintet straddles the lines of East Coast crossover and Bay Area thrash. Names like Nuclear Assault, Death Angel, Exodus, and possibly a bit of Overkill come into the picture. Although there are some shifts into staccato-ish groove for “Technophiliac” and “Leave Your God Behind” that make me think Crisix have been looking a little more into slightly modern aspects of Machine Head or Lamb of God for newfound inspiration. The strength of the group lies in the guitar mechanics and shifting rhythms/speed B.B. Plaza and Albert Requena use to flesh out these songs – their abilities galvanize adrenaline and maintain interest to allow “Get Out of My Head” and “Xenomorph Blood” maximum carnage upheaval and likely pit/wall of death approval. As great as many of the songs are, the over-abuse of profanity and obvious slower slam/groove tactics during “Cut the S*it” (beyond the ‘boom boom’ chanting) makes this track feel more like a Biohazard/Machine Head outtake than something one would expect from Crisix- and may have been best served as a bonus cut. The raspy, rapid fire vocals of Julián Baz ensure Against All Odds still retains that aggressive edge that keep the band too heavy for the commercial fringes – one only need to hear “Leech Breeder” to feel the venomous hurling that keeps things crossover and a little dirty.

Still maintaining a thrash stance, the added emphasis on crossover/groove elements may be off putting to some, or possibly gain them a younger crop of listeners who live for channeling that pent up aggression in the clubs where Crisix play. Either way, Against All Odds keeps the Spain metal scene going along.