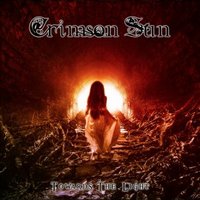 With the sheer volume of death metal that comes across this scribe’s inbox, sometimes it’s nice to just get away from the more extreme face of metal and dive into something a bit more melodic. Finland’s Crimson Sun are the latest band to squeeze through the barrage of extremity and fight for some air time. Towards the Light is the band’s first full-length, following up a 2013 EP titled The Border.

Sure to appeal to fans of bands such as Amaranthe and Epica, Crimson Sun bring the symphonic heaviness alongside some fantastic female vocals. Sini Seppälä has a powerful voice that effectively complements the band’s approach with grace and range. Songs like “The Spark” and the title track show how Seppälä can produce some soaring choruses, yet has the strength to give an added boost to the heavier verses. Speaking of which, Crimson Sun does bring a heavier approach than many of their peers. The riffing on some songs, like “The Herald” or “The Storm” veer towards more melodic death metal and progressive metal territory, harkening back to bands like Amaran albeit with a more modern approach. Along with this modern approach, one will hear some electronica elements, similar to Amaranthe’s output and creating a more upbeat sound (see “Eye of the Beholder”). It contrasts well with the heavier dynamic, and as previously mentioned, also aids in giving Crimson Sun more of an individual identity among a sea of “female-fronted symphonic metal” bands. For a debut, there are some solid songwriting chops already present, which are sure to bloom further with time.

Towards the Light is an impressive debut for fans of the established bands listed above. With an approach that differentiates them among their peers and an excellent voice to carry the music behind, it’s all but certain that Crimson Sun will be making more waves as they forge ahead in their journey.