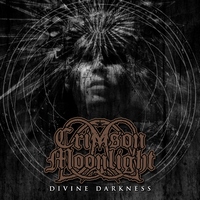 The words ‘Christian black metal’ have always been a tough sell for most metalheads. Perhaps that’s why Crimson Moonlight have always went with the ‘unblack metal’ tag instead. Their second album, 2004’s Veil of Remembrance, was an absolute monster of crushing black metal, but the band mostly disappeared after that, other than an EP in 2007. But their return with Divine Darkness is sure to spread the word around once more.

Divine Darkness picks up right where the band left off in the early 2000s. Brutal, blasting unblack metal with nods towards death metal at points. The overall tone leads back towards the late ‘90s black metal sound and bands like Dark Funeral, with a relentless wave of blastbeats carrying the ominous and scathing riffs towards the finish line (see the lightning fast “Kingdom of the Wolf”). The leads and melodies on the otherhand, provide a nice juxtaposition from the fury. Tremolo-picked melodies wrap themselves around the blazing riffs to provide a dynamic that keeps the music interesting. When the band does find themselves slowing down, the vocals also move into more death metal territory. The riffs of “I Am Tribulation” almost get a bit of groove in these parts, which gives the listener a bit of fresh air from the barrage of blastbeats.

If there’s one band that can effectively sell their brand of unblack metal to the often doubting masses, it’s these guys. While Divine Darkness does see Crimson Moonlight in their comfort zone, it’s refreshing to see the band back and doing what they do best – playing at relentless speed and fury. If you are looking for a band that can channel that old ‘90s black metal sound in both speed and atmosphere, Crimson Moonlight is a band you should know.