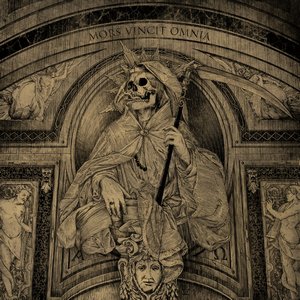 An oldy but a goldy the popular saying goes. Something well-established and often lacking in frills but solid all the same due, often, to sheer persistence. Mors Vincit Omnia has the gold down (seething from a solid cover, at that) and similarly through its approach to gothic-influenced black metal has the old down as well. An oldy but a goldy as a concept, however, is more than the sum of its parts for there is something about the object in reference that assists its continued acceptance. Mors Vincit Omnia does not have that something.

That isn’t to undersell it as an experience: it’s okay. It’s dense and full-sounding and from the shores of one hell or another to highest heaven it rings with purpose and intent. By virtue of that density it can be difficult to ascertain one song from another and the sequencing does not help much in this regard. Choral-use of cleans comes in frequently, in opener “Vanitas” and “Godspeed Angel of Death” though the in the latter the application is to a much more intense effect. The common use elements are exactly what you’d expect: tremolo, blast beats, and rasps enraptured in invocations of all esoteric matters, daemons, or deities.

The primary issue across the whole of Mors Vincit Omnia is one of persistent déja-vu. When the mixing of choral-like cleans comes in on “Upon The Pale Horse” it’s remarkably similar to the aforementioned “Godspeed Angel of Death” only this time, the song has eight minutes to work through instead of seven. Whether worked in as a matter of symbology or not, that’s a common thread here: six of the eight tracks come in at around seven minutes. They follow similar outlines and aside from the quiet ‘outro’ status of “Tempus Fugit”, most listeners (yours truly included) would be hard-pressed to drop into a random spot on the album and recognize it immediately.

With that being said, it shouldn’t be taken as completely negative. Mors Vincit Omnia is a lot of things but engaging is not always among them. It’s a solid listening experience that fills a very particular niche within realm of the black metal old guard. It’s a good deal too long but this alone won’t end your life as a listener. For a sect of the listening audience this is exactly what they want in an album. For everyone else: approach with caution.