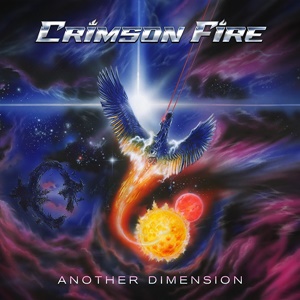 Always a stronghold for traditional/power metal artists, Crimson Fire is one of the domestic talents from Greece. Together since 2004, they’ve released two albums to date and shared the stage with bands like Anvil, Uli Jon Roth, and Heir Apparent among others. Another Dimension as their third album contains a wide array of 80’s influences from the melodic hard rock and heavy metal platforms – delivering stellar hooks on the vocal and musical fronts that will remind many of the veterans from the NWOBHM and early American scenes.

The twin guitar harmony aspect and solid rhythm mechanics from guitarists St. Turin and Nikos Efetzis garner the lion’s share of attention – peeling off circular, riveting work during “Don’t Fall from the Sky” that takes Iron Maiden and Riot at their best to smash them together. Softer keyboard strains inject some arena rock textures a la Europe during “On the Edge”, with equally engaging chorus work from Johnny B. that supplements the catchy aspects that will get most clapping or singing along. At other points you feel almost that fighter/80’s soundtrack atmosphere, the swirling guitars/keyboards dancing around each other while the AOR-style melodies make “Set the Night on Fire” a mid-album standout. The band shifts gears very well throughout the record, laying down a “Headless Cross”/Black Sabbath style track for “Eye of the Storm” with its solid, epic tempo and calmer, building lower register chorus into higher falsetto mountain-top peaks. Serving the needs of the song is paramount for Crimson Fire – even in an extended lead break for “Chasing Time” – the band always settle into the right transition and gravitate towards engaging earworms, vocal harmonies, and solid keyboard underpinnings.

The band would be the first to admit that originality isn’t the focus here – taking a bevy of strong 80’s bands as inspiration, twisting those key aspects around, and spitting out some stirring anthems that take you back to 1983-1985. Those into pre-Final Countdown Europe and 80’s-era Iron Maiden should delight in Another Dimension.