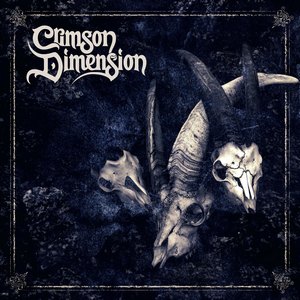 Blackened progressive metal is a moniker you don’t hear too often. Yet according to Finnish Crimson Dimension, this is what their self-titled debut EP contains. Or perhaps I should call it their debut album, since it’s over an hour long despite only containing four tracks. Each track ranges between 11 and 18 minutes which requires a lot both from the band and the listener. Do Crimson Dimension manage to keep things interesting? Yes and no.

First off, this is indeed quite progressive in the way the tracks are constructed. And while it lacks a bit of technicality and flair to be a gem of the genre, it segues nicely into atypical tempos and non-linear riffs from time to time. There is apparent skill behind all the instruments, and the vocals are powerfully harsh while remaining clear and discernible, giving the album an edge as progressive music goes. Unfortunately, the hooks and strong memorable segments are too few and far between. For the first two tracks I can’t shake the feeling that we get a bunch of talented musicians playing side by side, but missing out on the interplay between them.

The drummer, while tight and technical, often seems to do his own thing, while the guitarist(s) keep playing semi-melodic riffs without adhering to the core theme of the tune – it all seems a bit random even for progressive metal. The best work comes in the third track “The Age of Awakening”. Here the band immediately creates a mood and cohesion that they carry throughout the full 18 minutes and 23 seconds of the song. Now we’re getting somewhere! The final track keeps up this momentum and adds an extra intriguing level as it is sung in Finnish. Considering the second half of the album, Crimson Dimension may have a bright future ahead within the progressive metal genre. As for this self-titled EP/album it is a strong first outing that deserves to be checked out by fans of the genre.