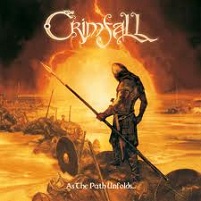 Good lord, another Pagan/epic metal band. They’re coming out of the woodwork and fast, almost too fast. This stuff is going to burn out pretty quickly, something we mused about last year, but hey, can’t fault a band like Crimfall for trying to get in while the getting is good. After all, metal is now more than ever a copycat league (yet another thing we dished on quite often in ’08), so if one band is doing something that works (see: Eluvietie, and for comparisons sake, Epica), someone else might be able to do it just as well.

As the Path Unfolds…, the band’s debut album (thank you, Napalm Records promo voice-over) runs the gamut from gushing, swooning female-focused excursions (see: “The Crown of Treason” and “Aubade”), to muscular, momentous battle metal surges that are pulled off admirably during “Wildfire Season” and “Shadow Hearth.” The juicy vocals of Helena Haaparanta are what heroic metal dreams are made of, apparently, and she sends us all away on a magical journey on “Hundred Shores Distant,” a tried-and-true ballad.

Still, can’t help but get worn out on this album pretty quickly, as it traces over a lot of what is being done in the aforementioned Pagan/epic metal field. Some duds abound in the form of “Sun Orphaned” and “Non Serviam” and it causes As the Path Unfolds… to taper off a bit, which is a why we threw a 7 at it.

Nevertheless, the ever-expanding market for bands

of Crimfall’s style will no doubt find something of value in this band. Haaparanta’s vocals are an easy selling point, but the band hasn’t quite hit the bullseye with its stock interpretation of all things epic in metal. 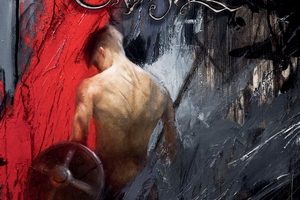