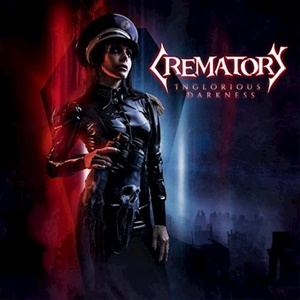 German veterans Crematory have been an institution in the gothic metal movement since the early 90’s (Awake from 1997 a personal favorite of this scribe). Evolving over the last decade with industrial touches, the band also add in German lyrical content next to mostly English-led material. Returning to those Teutonic roots for this sixteenth studio record Inglorious Darkness, the quintet delivers ten new tracks plus a German interpretation of an early staple of theirs – celebrating more than thirty years in the scene, still striving for excellence.

A pulsating, mid-tempo heavy groove penetrates right away with the gruff roar and calmer, whispering voices from Felix Stass that allows the title track to grab attention from initial exposure, a sure-fire number to appease the faithful. The push/pull flow between pulsating keyboards and down tuned, aggressive guitars keeps the hooks fresh and engaging – collectively accessing both gothic and metal overtones that make “Break Down the Walls” and “The Sound of My Life” magnetic outings, serving up plenty of bouncy parts that could go over a storm live. With four of the songs delivered in their mother tongue, Crematory access that harsh nature in stomping, industrial ways for “Zur Hölle” and “Das Ende” – probably eliciting thoughts of Rammstein, the latter containing some interesting electronic drumming parts against the natural metallic riffs during the heavier sides of the arrangement. The tolling of the bells plus forceful, melancholic vocals works seamlessly against some chugging riffs and steady double kick parts as “Until We Meet Again” gains favor during the second half of the album. It’s never easy to straddle two distinct styles as gothic and industrial music maintain in the metal landscape – but these musicians understand how to elevate both aspects to winning dimensions, creating catchy aural ideas with dynamic versatility, even in the smallest of details.

Inglorious Darkness should keep Crematory followers very pleased – and maybe bring some newcomers into the fold. While this niche style may never reach millions in terms of popularity, when executed to this degree, those smaller legions still savor and support quality output to a fever pitch.