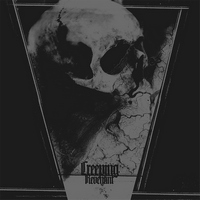 The amalgamation of subgenres has often allowed for some interesting results. Black metal itself within the last decade has seen some serious cross-pollination capabilities, with some rather impressive results. Lately, it seems the doom/black/death slurry has been picking up some speed and interest, and Creeping’s third album, Revenant, is one more album to add to the evidence rack.

Dark and somewhat downtrodden riffs seem to be the weapon of choice for Creeping. The black influences are more in atmosphere only, with minimal blasting to be had from start to finish. There are some swirling, murky melodies that tend to surface, as evidenced in the slow building of “Drear,” which technically works its way from the previous track (“Cold Soil”). These melodies keep a dark vibe, yet often can feel almost hypnotizing. The death and doom elements manifest themselves a bit more traditionally, but it doesn’t make them any less valuable. The slow, churning motion of the title track gives it an almost horror-esque feel (as do a number of the tracks), with haunting atmosphere that feels entirely in keeping with the sorrowful rasps moving things forward. The few moments that really propel themselves forward (“Scythes over my Grave”) have a disorientating feel to them, as if the walls are about to break down and help to give the band their namesake. The dynamics also help the otherwise mid-tempo approach from becoming stale over time.

Creeping provide a suitably uncomfortable listen with Revenant. Well-written for the style, but it never really goes outside of any the given parameters. Revenant is solid, but they could really make a name for themselves if they went all in on the atmosphere or doomy nature – something that gets them outside the box.