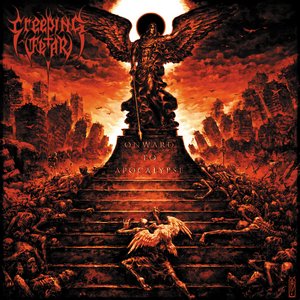 Sometimes (brutal) death metal is like a peanut butter and jelly sandwich. It’s reliable, you know it tastes good, but ultimately it’s just a peanut butter and jelly sandwich. It gets the job done, but you aren’t necessarily going to rant and rave to your friends about it. Such seems to be the case with the French act Creeping Fear, who unload their first full-length, Onward to Apocalypse.

Influences take their usual forms, particularly in the American-ized approach to things. Plenty of brutality in the machine, plus some notable groove and a sound that you can tell pays reverence to the old while not wanting to sound like a carbon copy. The usual lyrical tropes apply (death, Satan, you know the drill) but that’s par for the course for much of this genre (as are the growls/roars) and the cover is pretty gnarly in that regard. There’s also just a touch of black metal influences, which has a tendency to raise the aggression level of cuts like the title track. Plus some melodic and well-executed solos round the whole thing out. Listen to a track or two, such as the opening assault of “Life Denied” or groovy “As Vultures Fly, Battlefield Bleed” and you can tell that they’ve got all the right pieces in place. Only problem is that they are the same pieces that you’ve put together ultimately many times before.

Nothing particularly at fault with Creeping Fear’s approach, and as can be always said with an album like this, it’s ultimately up to the eye of the beholder in terms of how fresh they see an album like Onward to Apocalypse. From an objective standpoint, it’s solid and enjoyable death metal…you might just not be able to pick the name out from a line-up afterwards. 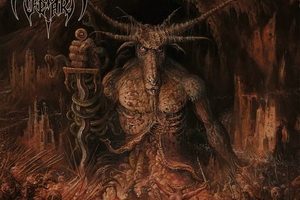