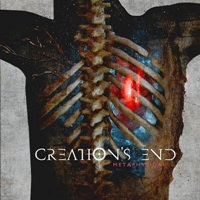 Mike DiMeo may be best known in the metal community through his 12 year tenure as Riot’s vocalist, showcasing his solid bluesy pipes during the 1990’s and early 2000’s. Following a brief excursion in Masterplan, this New York City quintet began in 2009, quickly releasing a debut album the following year with A New Beginning. Now the follow up Metaphysical aims to establish Creation’s End as another US force in a scene that seems to be thriving outside of our shores creatively (I’m looking to you, Scandinavia) while a lot of the newer acts want to be technically sharp yet struggle to write the next “Pull Me Under”.

An added advantage to Creation’s End’s appeal lies at the flexibility and seasoning of DiMeo’s voice. He’s not always reaching for the vibrato bird call notes, adhering to his mid-range comfort zone which improves the retention factor for the spirited “The Chosen Ones” juggernaut and darker yet melodic “Turn Away,” the latter containing some killer bass/drum interplay from Joe Black and Dario Rodriguez. Guitarists Marco Sfogli and Rudy Albert (the latter doubling up on keyboards) mix up their point/counterpoint riff duties with occasional synchronized harmony parts and seem adept at crossing over the past Dream Theater/Fates Warning-like template and newer futuristic nuances that come from a Pagan’s Mind framework. Check out “Bivariate” and their exotic meets down-tuned maneuvers on the semi-intricate “Bring to Life” for some killer knowledge of progressive metal bursting through the speakers.

A danger in the genre is always overstaying your welcome: progressive metal does not lend itself well to short 4-5 minute arrangements and condensing ideas. Creation’s End put an extra effort in to be dynamically diverse in their hour long, 12 track recording, as half the songs do not eclipse 5 minutes and “All I Have” at close to 8 minutes is their most ‘epic’ offering, and is a slow build on all fronts rather than exhausting your headspace.

When you have the right assembly, focus, and execution, the sky is the limit in terms of your talent translating into audience appeal. Creation’s End have expanded upon their early Dream Theater-ish worship on their first album, honed onto their skills and strengths to create a more memorable album in Metaphysical, and adhere to a philosophy that emphasizes ‘the song’ over individual accolades. Well done. 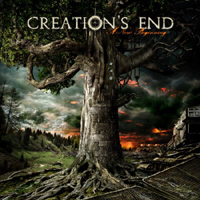