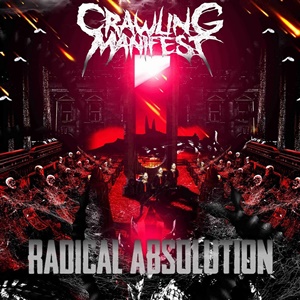 Making the best of a pandemic by extending what was originally going to be a four-song EP into a full-length release, Crawling Manifest from Maryland with Radical Absolution sits in that old school thrash meets modern aggression/groove-laden style. Paring down their lineup to a duo due to direction changes, listeners will immediately hear a hard-hitting amalgamation of furious riffs, active tempos, tight transitions, and bulldozer, barking vocals holding the material all together.

The opening instrumental “Land of the Free” features guitarist Trevor Layton laying down a clean circular underpinning and soloing in a freeform bluesy/semi-shred fashion over the top – the helicopter and narrative effects coming at the start and finish. The subsequent seven songs fluctuate between the mid-tempo to slightly faster thrash platforms – the longer arrangements featuring a bit more dynamic musical interplay, contrasts, or extended instrumental sequences. Holding down triple duty with bass, drums, and vocals, Andrew Gladu does an admirable job of switching up his groove and punk/thrash-like percussion abilities throughout – check out “Revolution” and “World War III” for his affinities to early Metallica, Exodus, and others of that ilk during the early Bay Area days (the latter having one riff similar to the chorus part of “Feel No Pain” from Forbidden). The mid-tempo crunch and roaring vocals during closer “Onslaught” bring Lamb of God to mind – ramping up the speed with some whammy bar/Slayer-esque angles for the lead break before a cultural guitar sequence should cause massive head whipping action. Andrew mixes up his vocals from a ferocious rabid dog barking approach to slightly gruff growls and the occasional lower register clean activities – a little rough around the edges, but serviceable to work in conjunction with the raw/primitive tones and energy present in these songs.

At least Crawling Manifest do their best to bridge two approaches of thrash without liberally cutting and pasting their favorite parts and calling the songs original. Radical Absolution has plenty of blistering songs – forceful, aggressive, and potentially explosive to charge up the right patrons.