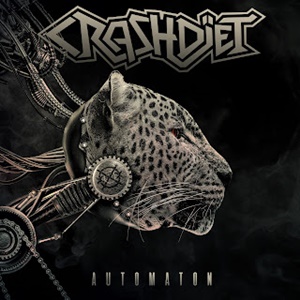 Concocting a mixture of heavy metal and melodic, sleaze-oriented hard rock, Scandinavia at the turn of the century developed a youthful affinity for bringing both styles together to create a fresh take on the scene that exploded in the 80’s. Some acts have gained more market share and acclaim than others – from Hardcore Superstar to Crazy Lixx, Reckless Love to Santa Cruz, as well as the current group under the reviewing lens, Crashdiet. They’ve been together for twenty plus years, releasing five studio records to date and surviving the death of vocalist Dave Lepard in 2006 to suicide and a few other lead singer changes before Gabriel Keyes secured the position in 2017.

Leading us to Automaton – the sixth record showcasing musicians competent, confident, and willing to excel as players and songwriters well-versed in all the tools of the trade necessary to deliver material bursting with memorable hooks and melodies. The four-piece emphasize multi-part vocal harmonies in all the key spots along with crunchy, arena-oriented guitars plus supplemental bass/drum grooves that are immediately infectious. Most will be swaying, screaming, and tapping along to the music of “Together Whatever” and “Powerline” right out of the gate, the main vocals of Gabriel showcasing versatility in his sleaze metal delivery, driving home those higher, helium-oriented screams plus solid mid-range activities, the latter containing a guest duet element through Michael Starr of Steel Panther. The metal side of things often comes in through the incendiary licks, heavier tones, and intuitive sense of proper phrasing Martin Sweet pushes through his axe abilities – “We Die Hard” and “No Man’s Land” containing some power riffs rivaling Judas Priest and Firewind. Flexing their hard rock muscle a la Ratt or Skid Row at times, the swagger tempo and playful vocals during “Dead Crusade” is a mid-album highlight, while the record ends on a half acoustic, half electric-oriented ballad “I Can’t Move On (Without You)”, the vocal harmonies and supporting keyboards sure to drive legions of lighters (or full on cell phone lighting) when aired live.

Quality will not be denied even in 2022 – Crashdiet keep climbing the ranks as they tour globally bringing this sound to more of the masses. Automaton is another keeper in that regard.