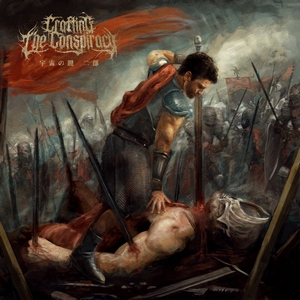 With two EPs under their belts previously, including last year’s The Cosmic Key, Crafting the Conspiracy return again this year with the second part to that specific EP and with a label behind them in Innerstrength Records. The Cosmic Key was musically competent but didn’t have much in the realms of identity, and the same issue still bogs down an otherwise enjoyable effort here in its second half.

The problem with Crafting the Conspiracy isn’t one that’s solely theirs. They just happen to be another act that sounds a whole lot like The Black Dahlia Murder. While there’s some veering away from this with The Cosmic Key II, it’s something that really plagues the first half of this EP. Even with the “Prologue” itself, which starts with some symphonics for the first minute, it quickly veers into hyperspeed melodeath territory that could go note for note with a TBDM track. Things aren’t helped as the vocals kick in with “Autonomy of Ascension” with rasps and roars that tow a very similar line. A few lower bellows help, but the sense of similarity is too striking. The first track that breaks away from this trend is “Equilibrium,” which feels like a breath of fresh air. The band shifts much more into melodeath territory, with high-flying guitar melodies and a touch of deathcore stomp. Some female vocals also enter the mix to switch it up in some quieter moments, and serves as a good contrast to the extremity. Instrumental cut “Cosmic Key II Polymerization” adds in some nice, proggy touches with the leadwork and an almost post-metal airy feeling at times while sticking to the frenetic, balls to the wall speed attack used throughout the EP. The final track concludes on a higher note as well, with more upfront deathcore aggression and melodeath energy, something that helps push them further into their own sound.

The second half of The Cosmic Key II provides some promise for the act to swing further into their own sound than its opening. If the band can continue to refine the edges of their emerging sound, they have some potential to showcase. But as is, there’s not much of a draw here unless you are a diehard fan of this particular style.