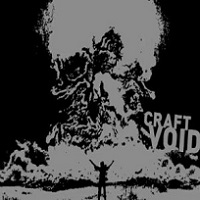 By our estimation, black metal is gradually making an effort to stay in its dark ages, never to return to the symphonic pomp and circumstance of its late-90’s era. Several bands are responsible for this, and oddly enough, they’re Swedish, as in Watain and the band in question, Craft. So hurling back to the early 90’s isn’t a problem on Void, and in by doing so, the Swedes make it look dauntingly effortless.

The follow-up to 2005’s critically-acclaimed Fuck the Universe, Void takes the grim, slow-burning BM approach of Darkthrone and goes even further back into the reaches once occupied by Hellhammer and friends. Along the way, the band picks up those hard to deny straight rock riffs that are becoming more and more intrinsic to modern black metal. It seems like more black metal bands want to rock out as opposed to creating a symphonic lightshow and good for them – keyboards had their fun in this realm.

A bunch of haggled and molten riffs work their magic here, most notably on “Come Resonance of Doom,” which creates an ominous lurch at the song’s beginning. Craft gets down with some Satryricon-like shake-and-bake on “Succumb to Sin,” weaving in some riff constructs that would no doubt make Satyr and Frost take instant notice, while the punishing “I Want to Commit Murder” gives Void its most direct shot, a malevolent play on black metal’s ugly (and gnarly) past.

Sure to make the black metal critical crowd ooze with delight, Void lays down a front of trueness that effectively captures the spirit of BM’s yesteryear. To say there is no light to be found on Void would be a gross understatement.